For a site running on SharePoint 2010, but still using the 2007 user experiences (also known as UIVersion = 3), the April 2013 Cumulative Update for SharePoint 2010 causes the Add Web Part dialog page to break in Internet Explorer.

After applying the CU, the dialog does not properly resize to display all the available web parts. 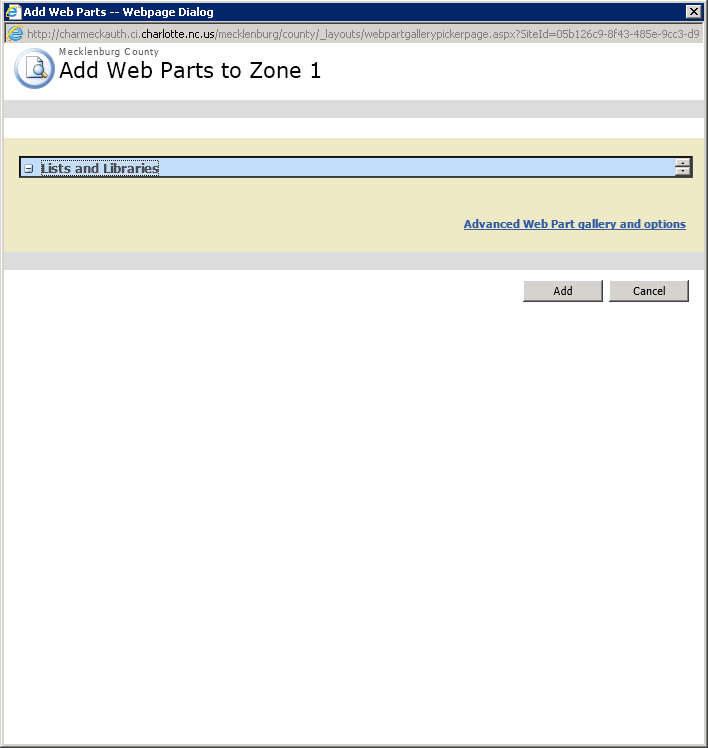 This problem only occurs in Internet Explorer.

After reviewing all the Javascript on the page and master page that is supposed to calculate and resize the display, I remembered that the CU had been recently installed.

Sure enough, when I compared the files to ones on a server that had not received the CU, the files were different.

Here’s the file from Service Pack 1

And here it is from April 2013 CU.  Based on the file date, it may have actually been the February 2013 CU that introduced the change.

To see what exactly had changed, I used Notepad++ to compare the two files.

As can be seen, the 2013 file (on the left) had a new meta tag added to force the display mode for Internet Explorer.  It appears that this caused IE to misreport the content height while resizing the dialog.

Simply commenting out the extra meta tag allowed the dialog to resize properly in Internet Explorer.

For SharePoint 2010 sites using the 2010 User Experience (that is, UIVersion = 4), this is a non-issue since the Add Web Part selector is part of the ribbon, not in a dialog window.